Hello guys and gals it has been a long time since the last post. Thats the reason why I give you the recent incidents in form of an itinarary. You will have to miss out on pictures but the list gives you already a good idea of my life in California.

Tuesday, 30.04 – Pain & Gain; Weird movie connected to a true story. Life the American dream, get the money, spend the money but don’t get caught in your naughty business!
Wednesday, 01.05. – BBQ at Ours – The usual BBQ again a yummy delight for hump-day.
Thursday, 02.05. – Tennis at the pool, Cooking gettogether – It has been warm that day in Thousand Oaks – I mean really warm, 30 degress Celsius. Still we treated us with a soak in the hot jacuzzi and self made dinner from the scratch. Damn tasty!
Friday, 03.05. – Beach Hangout, Habit, Juno – Yep the day at work has been long and the days before even more stressful. That’s why I treated myself with a hangout by the beach. Giving myself a treat at habit is just enough for the hard time spent at the beach soaking up the sun. I saw movie Juno twice and actress who acts for Juno does a great job – so cute! However did you know what Juno stand for? Juno is the godhead for family, responsible for motherhood, wedding and birth.
Saturday, 04.05. – Beach Party at a colleagues home. This was the embodiment of fun! Three times BBQ in one day, sitting by the pool, playing drinking games partly with non-alcoholics (drivers were present) and soaking in the jacuzzi. BBQ was made of pork-veggie-skewers, TriTip beef roast and pork ribs. What a feast!
Sunday, 05.05. – Getty Center is one of a kind. Theres a lot of weird art but also a lot of nice pieces. Best part was probably the “Overdrive”-Exhibition with art that shows the development of LA in the 20th century. To give the Sunday a nice fade out we have been visiting the Rodeo Drive in Beverly Hills. You won’t believe it theres a shop where you pay thousands of dollars entrance fee.
Monday, 06.05. – Dinner at CheeseCake Factory. I had some Skinnilicious pasta with tomato sauce. It was damn delicious and had also less than 500 calories.
Tuesday, 07.05. – Inline Skating was fantastic. I was practicing curves and it turned out very well – almost master now! There was not much time in between for dinner, so a Wendys Double Cheese Burger had to do before the cinema started. The movie we watched was Iron Man 3. Not my favourite of the trilogy but still very spectacular!
Wednesday, 08.05. – A wednesday without BBQ. Still I was not bored: Tennis and Pool were a good replacement for the BBQ. No one won, no one lost – neither at tennis nor at the pool.
Thursday, 09.05. – A colleagues father arrived in that week so we spent the Thursday night together at Malibu Dume Point for some really nice view along the coast and a tasty dinner at Paradise Cove restaurant. I had a floating sandwich. Actually the sandwich was swimming in a creamy seafood soup.
Friday, 10.05. – This was the day when our San Diego Trip started. After a long drive through Los Angelian rush hour we had lust after Pasta. So we hung out in our weekend bungalow and enjoyed pasta for dinner. A colleague and I took the chance for a small night out in busy San Diego Pacific Beach area. The final destination was the Red Saloon with country music remixes – just a feast for the ears. The taxi ride back was a must as we have been walking 30 minutes to the club.
Saturday, 11.05. – Our first stop in Diego was the Zoo. The zoo has the image of being one of the worlds best. However the fauna (which is usually why you go into a zoo) was less spectacular than the flora. There were so many unusual trees, bushes and plants – just a feast for the eyes (to use the same expression again). For lunch we have been at Old Town continued by a stroll through the same. It had the flair of being in an old western city – really nice! What is a visit to Diego without visiting the Pacific Beach Pier? Left and right of the first third of the pier were small and cozy bungalows and I already thought of buying one and renting them out. The end of the pier was breezy and held views of a couple of dolphins – quite hard to spot them without my specs. Again pasta was hip for dinner, this time accompanied by an icy tasty berry smoothie bought at the road side. The coke float for dessert was a very nice round off. Again we hung out in our bungalow but today it was possible to motivate more people for a night out at the Red Saloon. The drive towards the venue was made with a cab for only 7 $ but they way back was made on foot because a colleague tried to avoid puking in a cab. He didn’t puke on the way

Sunday, 12.05. – This day started with a stroll at Point Loma – San Diego Skyline view inclusive. This place is actually quite good to get grounded after a short night of sleep – breathe and relax: repeat. We paid 10 $ per car to get priority parking at the USS Midway aircraft carrier. Amazing how ppl are living on such a huge ship. There is everything provided for the soldiers: bunk beds, mess facility, doctor play rooms and a huge dentist area. The most impressive on the guided audio tour were the recorded audio of contemporary witnesses. Last two stops before a long journey back home to Camarillo was the Balboa Park with a slice of a concert with a huge outside organ and the Habit Burger with Nut Sundae dessert. The stroll through the park was exhausting due to extreme hot weather conditions.
Monday, 13.05. – It’s nothing to say about an easy start into a week. I hung out at a colleagues home to play some Basketball by the beach. The sandwich dinner gave me back the strength I needed to laugh while watchin IT Crowd on the colleagues couch.
Tuesday, 14.05. – That Tuesday we watched “The Great Gatsby” in the cinemas. Great story with an unexpected turn. Also actors were playing their rolls quite well. It’s a must watch!
Wednesday, 15.05. – Two of the colleagues were on a business trip to San Diego, so the BBQ was held for 3 ppl. The start off was on the patio to soak up the sun whilst exchanging some small talk. For BBQ we had chicken steaks already marinated from the super market and salad. The finish was made by an Oreo Cookie Ice Cream roll. Wow what a feast!
Thursday, 16.05. – There was not much to do, the colleagues just came back from their trip to San Diego. So another colleague and I made a two man BBQ with the leftovers after playing some Basketball by the beach. The IT Crowd afterwards was already compulsive.
Friday, 17.05. – One of our colleagues was in going out mood but he has not been able to convince everyone else of his outgoing mood. We ended up in the pool/jacuzzi at his house for some small talk and acknowledging that our lives here are not too bad.
Saturday, 18.05. – The Strawberry Festival was not a bad start for the weekend. It ended up in a fest and I counted 3 dishes in total: Strawberry pizza, Strawberry funnel cake and Strawberry build your own shortcake. A colleague was so kind and shouted me a strawberry smoothie with a mix of fresh strawberries and strawberry syrup. The strawberry lemonade was also very welcome on this hot spring day. I tried strawberry but and strawberry margaritha but both was not of my taste. A BBQ to a colleagues birthday plus jacuzzi was a nice round off for the day.
Sunday, 19.05. – What would you think of a nice sunday getaway in a muscle car America? We picked the Wheels and Wave car show in Santa Barbara. There were not only American but also German cars put on show. Most of the cars were in a good condition and nice to watch at them. I concluded the day with a inline skating ride along the coast line in perfect weather.
Monday, 20.05. – We went surfing after work

I caught only one wave and were not able to stand up but somehow it was fun. I fought with the wet suit one more time afterwards.
Tuesday, 21.05. – There is a massive event upcoming on 4th of July. For that we took this evening to plan the route we’d drive and the hotels we’d stay in. After such hard work it was more than welcome to relax in a jacuzzi.
Wednesday, 22.05. – A friend of a colleague who is pilot came over to Los Angeles for one day to celebrate in his birthday. We picked the Standard Hotel in LA downtown to give him a nice start in his next year. It has been a nice evening with loads of chatter.

What will be up in June? The calendar is quite packed. I will start with Disneyland and Downtown LA, then I’ll have a 4 day Hawaii/Honolulu getaway, a roadtrip down the Pacific Coast Highway from San Francisco back home and also planned is Six Flags Theme and Water Park. You see it never gets boring

Photo of the day 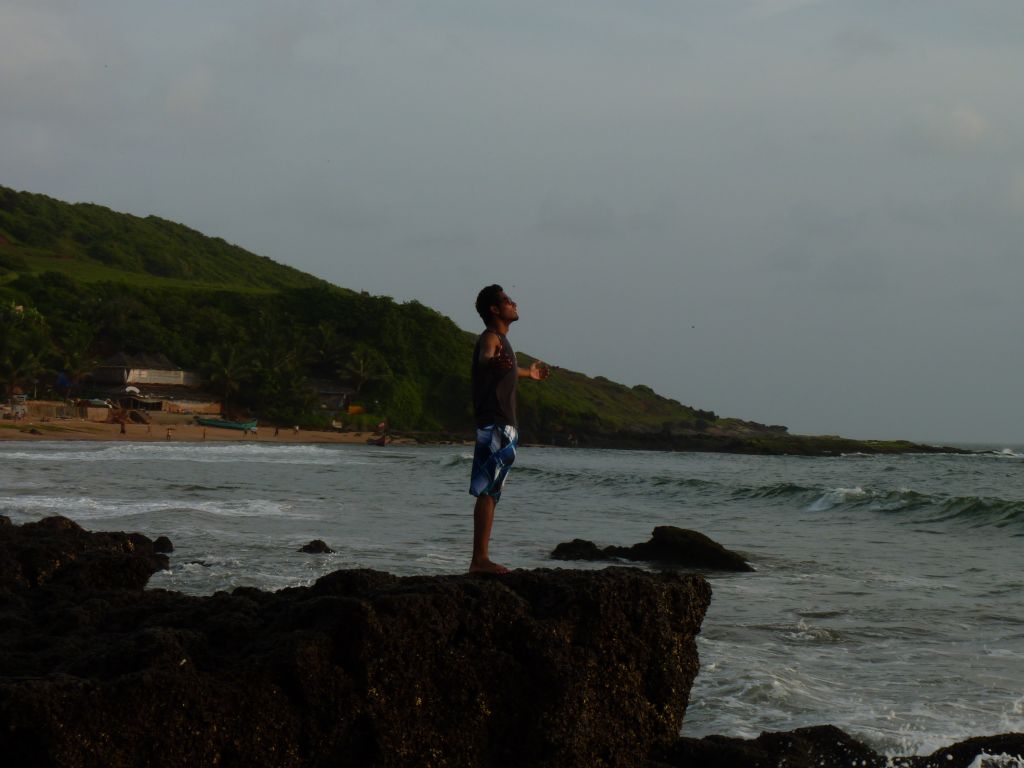